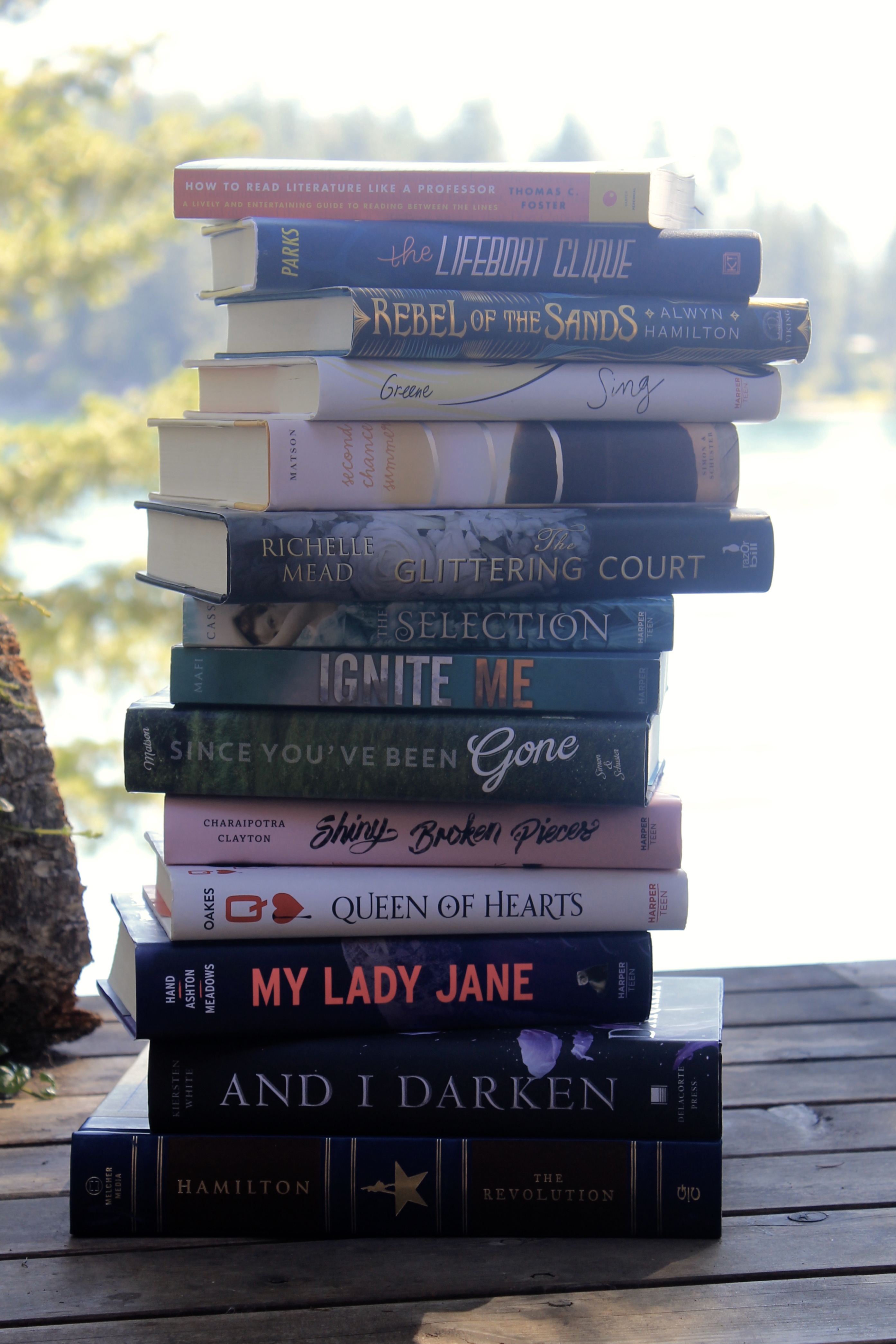 July was a pretty good reading month for me, I’ve had better this year, but I’m still feeling pretty good about it. I read eight books, and two of those eight were rereads. This month I just didn’t have much time to read because we’ve had a ton of guests over at our house. I’m hoping next month to read 10+. 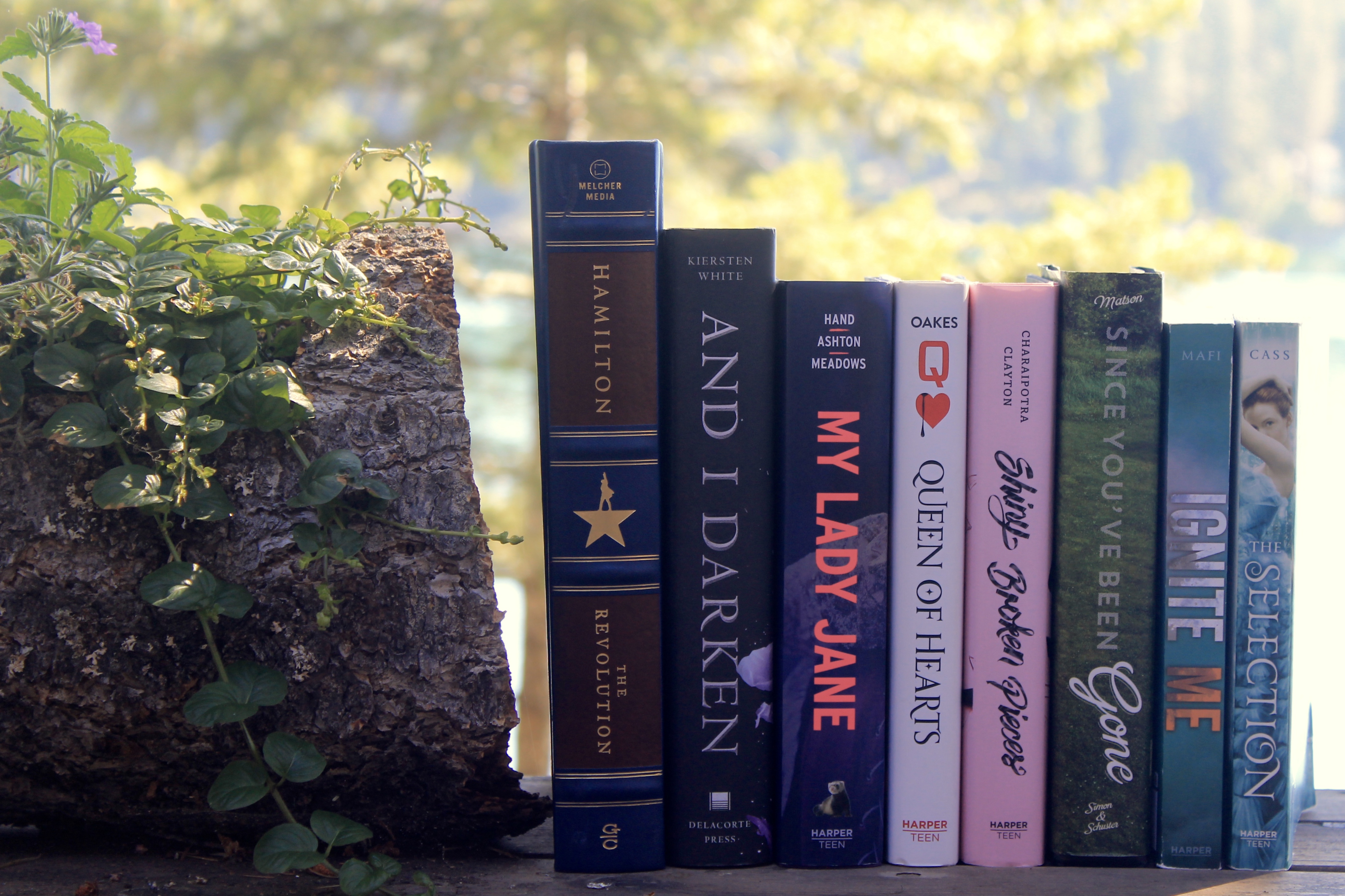 Hamilton: The Revolution by Lin-Manuel Miranda and Jeremy McCarter

Hamilton is one of my absolute favorite things. I actually thought the concept was kinda dumb before listening to it this spring, and now I’m obsessed. I really enjoyed reading this though because we got to read about the origins of the musical and just how complicated it was. Five out of five stars! I recommend his to any Hamilton fan.

Ignite Me by Tahereh Mafi

I’m really sad that I didn’t enjoy this series as much as a lot of other people. Honestly, the only reason I even kept reading it was because I had received the whole series for Christmas, so why not? You can read my review of Ignite Me here. to see just why I don’t like this book. One out of five stars.

Queen of Hearts by Colleen Oakes

This book was definitely a pleasant surprise. I wasn’t expecting a whole ton from it, but came out really enjoying it, despite the fact that not much happened and the main character was super annoying. I still haven’t read Alice in Wonderland though, so I can’t compare this retelling. You can read my review here. Four out of five stars!

The Selection by Kiera Cass

The Selection was my first reread this month. I read it mainly because I don’t have all my unread books with me and was running out of things to read, even though I can’t stand this series. I actually didn’t mind The Crown, but ugh, the rest of these books are so annoying. I just want to reach through the page and rip off America’s head! I still really like these books though, and I don’t know why, honestly. They just have something so appealing about them to me. Three out of five stars.

This is already one of my new favorite books! I loved every single part of it, the comedy, the characters, the setting (I love history and the tudor era has always really fascinated me). It was such a fun read, and I couldn’t seem to stop laughing! You can read my review here. Five out of five stars!

I enjoyed this one the first time around I read it last year so much more. Don’t get me wrong, I still really enjoyed reading it, but I remember it being so much better. Emily starts off so annoying, which annoyed me, but we get some character development. Yay for character development! Three out of five stars.

I didn’t even know who Vlad the Impaler was before reading this book. And I darken is a genderbent Vlad the Impaler retelling, and I loved every bit of it! Okay, there were some things that I wasn’t a huge fan of, but still a great read. Four out of five stars!

This book, the sequel to Tiny Pretty Things, was everything I wanted it to be and more! If you thought the drama in the last book was crazy, it was even crazier in this one. Wow, I still can’t believe some of the things that happened. I just want a million more books with these characters set at the American Ballet Conservatory. Five out of five stars!

Along with not reading a ton of books, at least not compared to what I read last month, I didn’t buy a whole ton either. Overall, I purchased six books this month.

The Glittering Court by Richelle Mead

Also included in the photo are Hamilton: The Revolution by Lin-Manuel Miranda and Jeremy McCarter and How to Read literature like a Professor by Thomas C. Foster (this one is required summer reading for school) because I wasn’t able to include them in last month’s haul photo.

So that was my June wrap up! I started this blog after wanting to for a while, read eight books, and bought six. How many books did you read this month? I would love to know!