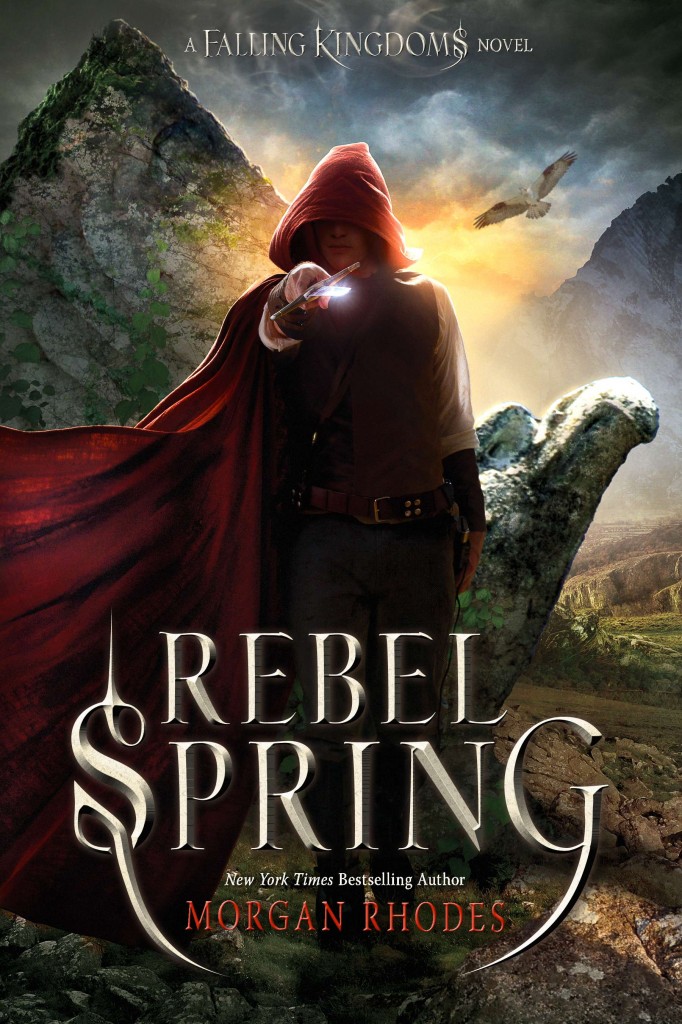 Series: #2 in the Falling Kingdoms series

Summary from Goodreads:  The road to power… is paved with blood and magic.
Cleo is now a prisoner in her own palace, forced to be an ambassador for Mytica as the evil King Gaius lies to her people.
Magnus stands to eventually inherit the new kingdom but is still obsessed with his feelings for his adopted sister, Lucia.
Lucia is haunted by the outcome of the breathtaking display of magic that allowed her father to capture the kingdoms.
Jonas watched at the palace gates a troop of rebels behind him, waiting for him to tell them how he plans to overtake King Gaius.
After a bloody siege, Auranos has been defeated, its young queen orphaned and dethroned. The three kingdoms—Auranos, Limeros, and Paelsia—are now unwillingly united as one country called Mytica. But the allure of ancient, dangerous magic beckons still, and with it the chance to rule not just Mytica, but the whole world over…
At the heart of the fray are four brave young people grappling for that magic and the power it promises. For Cleo, the magic would enable her to reclaim her royal seat. In Jonas’s hands, it frees his nation, and in Lucia’s, it fulfills the ancient prophecy of her destiny. And if the magic were Magnus’s, he would finally prove his worth in the eyes of his cruel and scheming father, King Gaius, who rules Mytica with a punishing hand.
When Gaius begins to build a road into the Forbidden Mountains to physically link all of Mytica, he sparks a long-smoking fire in the hearts of the people that will forever change the face of this land. For Gaius’s road is paved with blood, and its construction will have cosmic consequences. 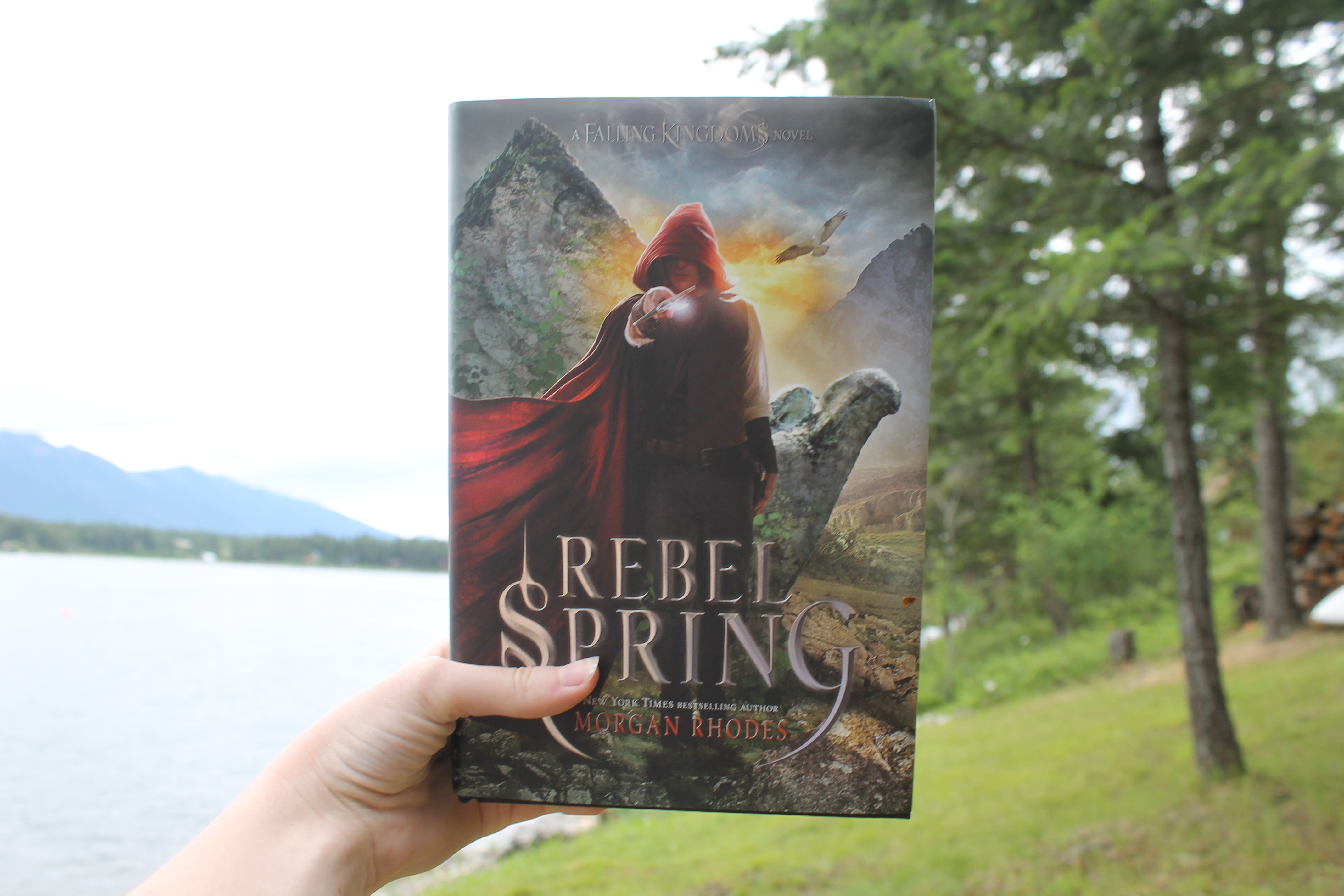 This book was so good! And so much fun! I really enjoyed Falling Kingdoms but Rebel Spring was even better. There were a few small things that I wasn’t a huge fan of in this book, but other than that I really enjoyed it. Also, there will be some spoilers for the first book. So if you haven’t read it yet, go do that!

“Sometimes,to regain sanity,one had to acknowledge and embrace the madness.”

It starts off after the battle in Falling Kingdoms and King Gaius has taken over Mytica. He announces that Cleo and Jonas are going to be married, a surprise to all of them. So, they are consumed with all the planning for the wedding, especially Cleo. Meanwhile, Jonas has his own group of rebels he’s leading with his friend Brion. Lucia is put in some kind of sleep and remains unconscious most of the time after the battle and using her powers to wipe out tons of soldiers which ultimately gave King Gaius Auranos.

Magnus really got on my nerves, to be completely honest. Everyone seems to love Magnus, but he just bothers me. I don’t know, it just gets on my nerve how he rarely even sticks up for himself and is always whining about everything. Like one minute he’s upset his sister doesn’t have romantic feelings for him (I mean seriously, even though she’s adopted that would just be weird) and the next it’s because he has to be around Cleo. Quite your whining! Seriously.

“Let me make this very clear, Prince Magnus,” Cleo said evenly, fighting to keep the tremor from her voice. “I will never be forced to marry someone I hate. And I hate you.”

I really like Cleo though. Unlike Magnus, she at least sticks up for herself and what she believes in. Everyone treats her so poorly because she’s a princess and they think she’s spoiled. Well she’s not. And I love Cleo. She doesn’t deserve to be treated so terribly after everything she’s been through, honestly. I’m just glad we have at least one character who knows how to defend themselves.  Cleo’s by far my favorite character, and I felt kinda bad for her that she had to get married to Magnus. A lot of people really ship those two, but I don’t. At least not yet. Cleo’s awesome! Magnus, well, not so much. In my opinion at least.

Then we have Lucia. That girl barely gets any page time I feel like. She also comes across as kind of annoying to me, and I hated how she blamed everyone else when she realized she had killed all those people in the battle with her magic. Even in the last book she seemed to show up the least out of any character. I just wish we got to see her more! Most of her chapters were this weird dream thingy. I have mixed feelings on her relationship with Alexius. I just hope Lucia will play a more prominent role and add more to the story in the upcoming books.

Jonas doesn’t get much page time either, at least not as much as Cleo and Magnus. I like him, but not as much as in the first book. Half the time I feel like he’s just kind of there for no reason… if that makes any sense. He led his own group of rebels, but it seemed like he made them do most the work while he was off focusing on Cleo. For the first half of the book, his main focus is just on kidnapping Cleo, which was kind of annoying.

Then there’s Lysandra. I wouldn’t mind if she got killed off at some point to be honest. She just kind of came in, and made things a lot worse than they needed to be. Like Lucia, it felt like she was just kind of there and didn’t add much to the plot at all. We also get a few chapters from the King too, who I hate more than anything else in this book. Is it bad to say that I wouldn’t mind if he got killed off in the next few books? The chapters from the Watchers also felt kind of unnecessary. I didn’t really understand how that added much to the plot. I could do without them, or their chapters.

I feel like the main thing that bothered me most was the occasional new POV added in. Four POVs is enough in my opinion, and now all these new ones are coming out of nowhere. I understand they help the plot progress but still kind of annoyed by all these new POVs we got.

“Oh, come now,” he said to her. “You’re breaking my heart.”
Cleo’s jaw tightened. “Such damage would require you to be in possession of one.”

The romances in this book just feel so forced. I’m not a huge fan of any of them. Who knows, maybe they’ll get better. At least I hope they do. Everyone’s in love with Cleo though, it seems like. One minute she’s in love with Theon, then Jonas, and then her and Magnus start falling for each other. It just doesn’t feel real.

We saw a lot more world-building in this book than in Falling Kingdoms, which I was grateful for. There definitely could be more, but then again this is a six (?) book series so I know we’ll get it. This world actually really interest me. I just wanna know more! The magic is a bit confusing, but like I said, hopefully more explanation in the next books.

The plot was interesting and fun! With four main POVs and the occasional others scattered in, there’s no way it can get boring (which it rarely does). The many POVs can get overwhelming, and I wouldn’t mind if it was cut down to like three and Lucia didn’t have one, but four is fine.

Even though there were a lot of things and characters that bothered me, I still really enjoyed this book as whole, and the things I love definitely made up for it. Overall, I would have to say 4.5/5 stars!

One response to “Rebel Spring”