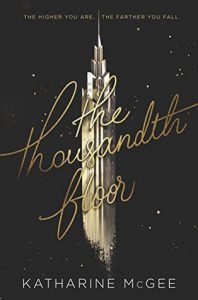 The Thousandth Floor by Katharine McGee

Summary from Goodreads: New York City as you’ve never seen it before.
A thousand-story tower stretching into the sky. A glittering vision of the future, where anything is possible—if you want it enough.
Welcome to Manhattan, 2118.
A hundred years in the future, New York is a city of innovation and dreams. But people never change: everyone here wants something…and everyone has something to lose.
Leda Cole’s flawless exterior belies a secret addiction—to a drug she never should have tried and a boy she never should have touched.
Eris Dodd-Radson’s beautiful, carefree life falls to pieces when a heartbreaking betrayal tears her family apart.
Rylin Myers’s job on one of the highest floors sweeps her into a world—and a romance—she never imagined…but will her new life cost Rylin her old one?
Watt Bakradi is a tech genius with a secret: he knows everything about everyone. But when he’s hired to spy by an upper-floor girl, he finds himself caught up in a complicated web of lies.
And living above everyone else on the thousandth floor is Avery Fuller, the girl genetically designed to be perfect. The girl who seems to have it all—yet is tormented by the one thing she can never have.
Amid breathtaking advancement and high-tech luxury, five teenagers struggle to find their place at the top of the world. But when you’re this high up, there’s nowhere to go but down…

This book takes place in futuristic New York City. About seventeen/eighteenish years before this takes place, a tower was installed and now everyone lives in and everything is located in this tower. At first I thought everyone was essentially trapped in the tower, but then I realized that they could leave and travel to other places. It follows five people, Leda Cole, Avery Fuller, Eris Dodd-Radson, Watt Bakradi, and Rylin Myers and their crazy, intertwined lives.

First we have Miss Leda Cole, who has some serious issues, and even that’s not saying much. This girl is literally crazy. She becomes so obsessed with Atlas (Avery Fuller’s adopted brother) that she hires Watt (another main character) to pretty much stalk him and figure out all his secrets. It’s seriously creepy. I get that she can have a crush on him, but wow, Leda takes this to a whole new level. She is a recovering drug addict and has spent the last few months in rehab. However, she starts doing these weird futuristic drugs again, so I guess it throws out the whole recovery thing out the window, as she stalks Atlas. She also puts drugs in other people’s drinks for information and just does a lot of very messed up and crazy stuff.

On the other end of the call was Atlas, her brother ─ and the reason she never wanted to kiss anyone else.

Then we have Avery Fuller. Before she was born, her parents bidded to get the Thousandth Floor penthouse, which was where Avery grew up with her adopted brother Atlas. She’s lived a pretty good life without any problems. Her best friend is Leda and she’s surrounded by lots of other close friends. The only problem is, she’s in love with Atlas. I get that they’re adopted siblings, but wow, that’s still so messed up to me. I wouldn’t say she’s crazy on the same level as Leda, but some stuff Avery did was pretty messed up too. There was literally nothing special about Avery though. She’s basically described as the most beautiful person ever and gets caught in a love triangle. Can you say cliche and really boring and overused?

Eris Dodd-Radson was the only character I even slightly liked. Though she had her problems, she felt the most real to me. She’s grown up having a perfect life with great friends as well, until some really bad family stuff happens and her whole life basically goes to hell, or so she thinks. I know that all sounds really cliche, but I found it super interesting. I enjoyed reading about her learning to accept her new life, until some other stuff happened and that all got thrown out the window. Anyways, I still liked Eris most out of anyone, though I wouldn’t say I necessarily liked her that much.

Honestly, Rylin Myers did not stand out to me at all. She’s just another of the one too many characters who gets caught up in this messed up upper floor life. Her boyfriend is a drug dealer but then she meets Cord Anderton, who lives near the top, and starts to fall in love with him. But at the same time she also steals from him. It makes you wonder whether or not she really did love him, right? She had your typical YA backstory, too. Her parents died and she lives essentially in poverty with her little sister. Wow! So original… not.

Lastly, Watt Bakradi. Watt is a super smart hacker and is actually hired by Leda to hack and stalk Atlas. I get that he needed the money, but wow, I don’t know why he continued to do all the hacking for her because she gets to the point of a legitimate stalker. But anyways, Watt lives on the two-hundred-fortieth floor with his immigrant family. They’ve never had the most money, but Watt has found his place as a genius hacker. Like Rylin, he ends up getting caught in upper floor life which pretty much ruins his life. If he had actually been reasonable and smart, maybe he wouldn’t have ended up in all the stuff he did, such as falling for Avery. Wow, super original too! This book killed me with all the atypical YA cliches.

There were too many characters in general to even think, I swear! On top of our five main ones, there’s also a ton of side characters. My head is still spinning out of confusement because of this book. Eris was the only character in the entire book I wanted to keep reading about and found interesting. All the characters were so boring and nothing new to be honest. I’m so tired of reading about these kinds of typical characters.

“Sometimes, love and chaos are the same thing.”

The romance was terrible in my opinion. Just all of the romances were bad, and I didn’t get any of them, least of all Avery and Atlas. I mean come on, it’s basically incest. Yeah, yeah, yeah they’re adopted blah blah blah but it’s still disgusting. In my mind, it’s still incest. Ugh it just grossed me out reading about their relationship. If they weren’t siblings I wouldn’t have minded but wow, this really disgusted me.

I found the whole tower and world to be very interesting though. The concept around this book was super cool and had a lot of potential, if only the stupid and cliche characters hadn’t ruined it. I was still super intrigued about all the worldbuilding and futuristic technology and drugs. It’s set about a hundred years in the future, which I was really interested by. Normally we don’t know what year a dystopian is set in, but we did for this book, which I really liked.

The writing was nothing all that special, but it kept me entertained. It’s a good thing because otherwise I would have DNF’d this at like page fifty. It was pretty predictable, but like I said, the author’s writing style kept me interested and wanting more. I would have to go as far as to say the writing was the best, and only (world building included), good part about this book.

I’m still so disappointed by this book. It had so much potential! Overall, it was cliche, boring, and super messed up, yet entertaining all at once. I have no intention to even read the sequel, that’s how much I disliked this book. Two stars only because I was kept entertained and interested by the writing, otherwise this book fell very flat for me.

2 responses to “The Thousandth Floor // A Very Messed Up Book”