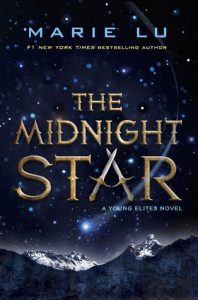 The Midnight Star by Marie Lu

Series: Third in a trilogy

Summary from Goodreads: There was once a time when darkness shrouded the world, and the darkness had a queen.
Adelina Amouteru is done suffering. She’s turned her back on those who have betrayed her and achieved the ultimate revenge: victory. Her reign as the White Wolf has been a triumphant one, but with each conquest her cruelty only grows. The darkness within her has begun to spiral out of control, threatening to destroy all that she’s achieved.
Adelina’s forced to revisit old wounds when a new danger appears, putting not only Adelina at risk, but every Elite and the very world they live in. In order to save herself and preserve her empire, Adelina and her Roses must join the Daggers on a perilous quest—though this uneasy alliance may prove to be the real danger.
Bestselling author Marie Lu concludes Adelina’s story with this haunting and hypnotizing final installment to the Young Elites series.

I know, I know, total unpopular opinion here, but I feel like this book was such a step down from the last two in the series. I remember having a hard time getting into the Rose Society, but this one was even worse. To be a hundred percent honest, I have an incredibly hard time with the writing style in these books, which I’ll get into later. I felt no emotion towards any of the characters, and honestly, I found Adelina really annoying, whereas in the last two books I LOVED her and her character development.

So basically, this book starts off a year after the events in The Rose Society. Adelina is still queen and continues to take over other, smaller nations, while still on the run from the Daggers, not to mention that her sister left her to join them. As queen, Adelina has made it so that now the unmarked suffer and the malfettos rule, completely backwards from what it was before. But you can see as she is getting a hold of more and more power, Adelina is becoming weaker though trying to act stronger. The rest of the Elites are becoming more and more weak as well, their powers destroying them. Raffaele realizes to save themselves and everyone else, they must visit the Underworld and the Gods, but cannot do so without the help of Adelina and her team working alongside the Daggers.

“You cannot harden your heart to the future just because of your past. You cannot use cruelty against yourself to justify cruelty to others.”

Adelina, like I said, seems to be growing increasingly weaker as time goes on. It’s been a whole year, Violetta having left her as well, which only makes matters worse for Adelina. She continues to use her powers to terrorize others, such as killing them with her illusions only because they used the word “malfetto”. She’s done putting up with everyone else and the way others like her have been treated. However, it’s clear that is she losing control of her powers and is becoming weaker.

Honestly, I felt no connection with any of the characters in this book. I used to love both Violetta and Adelina, but in this book, I could’ve cared less. I could care less about Magiano, Teren, Raffaele, and the others too. The characters were boring and felt very one sided in this book, while they felt so much more complex and developed in the past two. I don’t know if it’s because I’ve become a more critical reader over the past few years, but either way, I still feel like the first two books were so much better, character wise too. My favorite character has always been Enzo, and it just makes me so sad. I really wish he was still the same Enzo he was in the first book. Other than him, the other characters didn’t stand out in my mind at all and were kind of boring to read about.

I hated the romance. It was terrible, to put it lightly. In the Legend series I felt like Marie Lu did a great job with romance, and in The Young Elites too. However, the romance just felt like it was going downhill in The Rose Society. Here? It was bad. The relationships feel forced and rushed and the characters, in my mind, just don’t do well together.

Like fear and fury. It is energy from another realm, threads from beneath the sur­face, an immortal place never meant to be disturbed. Raffaele trembles.
Something is poisoning the world.

The plot was boring. I didn’t feel myself anticipating what would happen next like I have in Marie Lu’s past books. It was so boring and flat, and also very short. For a plot like this, it should’ve been longer to get everything out, but instead it felt rushed, like Marie Lu wanted to wrap it up as quickly as possible. I mean, nothing happens until about page 200, and by that point the book is already more than half way through. What’s the point rushing a plot that has the potential to be so complex?

I love love love the world building in this series though. We didn’t learn a whole lot in this book, but I feel like that’s because this world is already so well developed. Unlike just about everything else, it’s interesting, especially having been inspired by the Italian Renaissance.

Now, onto my least favorite part: the writing. I had such a hard time with it in The Midnight Star. I’ve always disliked present tense more than past, but it doesn’t bother me that much. These books are told in present tense, which is why I feel like the writing is so flat and bland. We don’t get to see as much into the characters’ heads and there isn’t much detail either. The writing is pretty simple, and honestly, kind of bad. Of all the things I disliked and was disappointed by in this book, it was the writing most.

Overall, The Midnight Star was a huge disappointment. I don’t even know why I’m being so generous and giving it 2.5 stars. This book wasn’t bad as a whole, there were just so many aspects of it that weren’t good and/or portrayed well. In my mind, this was a huge step down from Marie Lu’s past works.