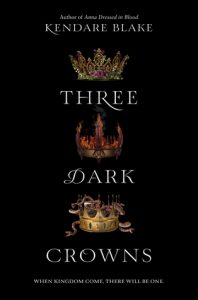 Summary from Goodreads: When kingdom come, there will be one.
In every generation on the island of Fennbirn, a set of triplets is born—three queens, all equal heirs to the crown and each possessor of a coveted magic. Mirabella is a fierce elemental, able to spark hungry flames or vicious storms at the snap of her fingers. Katharine is a poisoner, one who can ingest the deadliest poisons without so much as a stomachache. Arsinoe, a naturalist, is said to have the ability to bloom the reddest rose and control the fiercest of lions.
But becoming the Queen Crowned isn’t solely a matter of royal birth. Each sister has to fight for it. And it’s not just a game of win or lose…it’s life or death. The night the sisters turn sixteen, the battle begins.
The last queen standing gets the crown.

Three Darks Crowns, was, well, to say the least, not what I expected at all. That doesn’t mean I didn’t like it though! I actually really enjoyed this book, it just wasn’t at all what I thought. It wasn’t very dark, as the title suggests, and the sisters don’t really start to fight for the crown until the end. The first 350 pages is just build up to what is going to come. I thought everything would be resolved in this book and that the fighting would start right away, but I guess not.

Three Black Witches are born in a glen,
sweet little triplets
will never be friends.

Three Black Witches, all fair to be seen
two to devour
and one to be queen

This book starts out with Queen Katharine turning sixteen at Gravesdrake Manor in the capital city. Queen Arsinoe and Queen Mirabella are also turning sixteen, Arsinoe in the naturalist city and Mirabella at the temple. Katharine can supposedly swallow any poisons without any effects, though that seems to not exactly be the case. Arsinoe, on the other hand, hasn’t even developed her powers and has yet to meet her familiar, an animal loyal to her that she can control, signifying her power. Mirabella is by far the most powerful. Being an elementalist, she can summon any of the elements such as creating large thunder and lightning storms.

More into detail on the sisters, first is Katharine, who like I said, has very weak poisoner powers. People don’t realize anything is wrong, but then at her birthday celebration she is expected to swallow all sorts of poisons, and ends up getting sick and throwing up, disappointing the other poisoners. Katharine could be kind of annoying at times, and is very obviously the youngest of the triplets just by her childishness. She also seemed to get intimidated and nervous easily, but at the same time was determined to win and become queen? Her character was interesting, though kind of confusing. Because for the last three generations (and the first time ever) poisoner’s have sat on the throne, so now they occupy the capital city, where Katharine lives at Gravesdrake manor. She has grown up being taken care of by Natalia Arron, a member of one of the most powerful families on the island.

Queen Arsinoe can basically do nothing of significance. Her powers have not yet developed, at all. Katharine can take some very light poisons, but Arsinoe? She has nothing. As Katharine called her, she’s a dud. Arsinoe has no familiar either, while her best friend, Jules, has a cougar for a familiar, symbolizing that she is one of the most powerful naturalist there is. The two of them have a very close friendship, along with Joseph as well, who tried to smuggle Arsinoe off the island but was then exiled and is Jules’s boyfriend. Arsinoe kind of really annoyed with me. She’s kind of given up and knows there is no way for her to beat her sisters, so has kind of just stopped trying. This really bothered me. She was boring and flat, and I honestly could have cared less about what happened to her.

Lastly, is Queen Mirabella. I kind of liked Mira, more so than Arsinoe at least, but Katharine was my favorite. She was annoying at times, but still a somewhat interesting character. Mirabella is the only one with any powers, really. She’s pretty powerful though. Mira lives at The Temple with other Priestesses (this part kind of confused me), unlike her sisters who were raised by the powerful Arrons and Milones. She’s incredibly emotional, going from being fierce and excited to win the competition one minute then the next crying about her sisters (and her love interest). Ugh ugh ugh, it was so annoying. But when she wasn’t being an emotional rollercoaster, I did like her.

The romance was bleh. Terrible, really. Pietyr, Katharine’s love interest, kind of manipulated her into the relationship. I hated him right from the start. He was a total jerk to Katharine, too, but she didn’t realize it because she had never been around any sort of relationship. It was total insta-love as well. Worst of all though, was the love-triangle. *cries* Why, oh why, was there a love triangle? It was absolutely horrible though, just the way it all went down and how it ended for one character, who deserved so so so much more.

It was hard to keep up with all the characters and storylines because Kendare Blake introduced about five-thousand different (and very unnecessary) people. My head was spinning in circles around and around. Really, only about half of the characters we met actually added to the storyline, so I could have done without the extra ones thrown in for no reason, basically.

More world-building would have been great as well. I’m still kind of confused on this world and how the whole queen thing works. Like, what exactly happens when a queen has the triplets? It was vaguely described in bits of pieces, making for a very confused Adalyn (and I know this wasn’t just the case for me by reading other reviews). I also wanted to know more about the other powers (I think the Sight gift, or something like that, and the War gift?).

The plot, though not what I was expecting at all, kept me interested and engaged. I really wanted there to be more of the sisters fighting for the crown while most of it was all buildup. Still, the three different storylines were all very different, yet similar, and kept me wanting to know what was next, especially as they all began to (messily) tangle together.

I guess the writing wasn’t the most notable, but it was still good, and enough to keep me reading. The writing definitely wasn’t the strongest part of the book, like somewhere I’m still thinking about it weeks later, but that doesn’t mean it was any bad.

Overall, I really enjoyed this book, though it for sure had its flaws. I was hoping for something more dark and a little different, so I guess my expectations were raised pretty high. I’m excited to read the next book though and find out what happens with the sisters, especially who becomes Queen crowned!