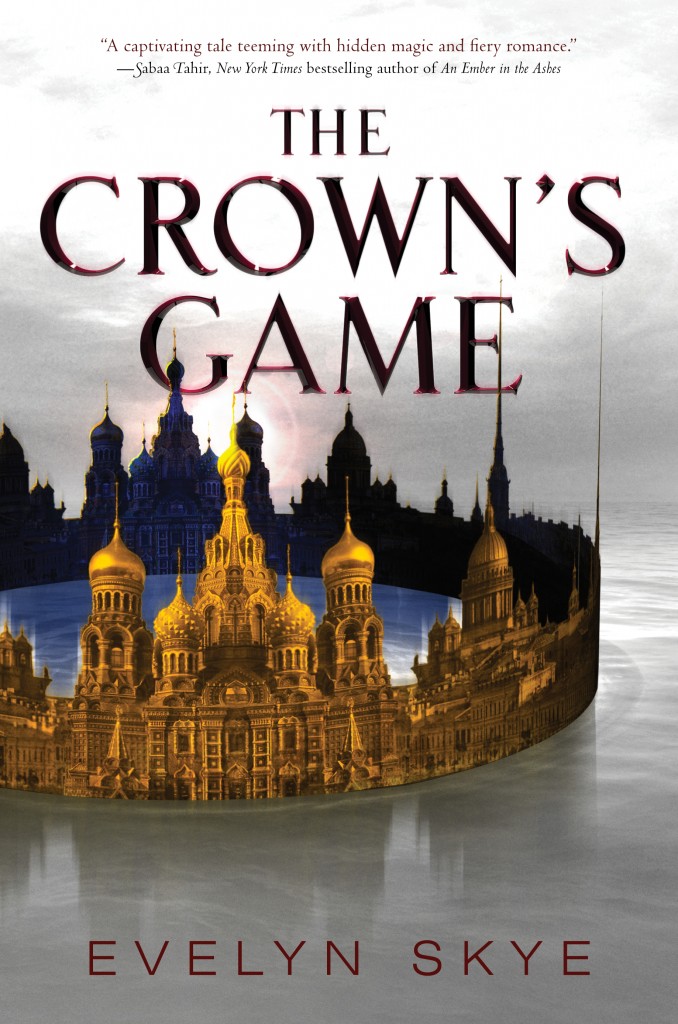 Summary from Goodreads:Vika Andreyeva can summon the snow and turn ash into gold. Nikolai Karimov can see through walls and conjure bridges out of thin air. They are enchanters—the only two in Russia—and with the Ottoman Empire and the Kazakhs threatening, the Tsar needs a powerful enchanter by his side.
And so he initiates the Crown’s Game, an ancient duel of magical skill—the greatest test an enchanter will ever know. The victor becomes the Imperial Enchanter and the Tsar’s most respected adviser. The defeated is sentenced to death.
Raised on tiny Ovchinin Island her whole life, Vika is eager for the chance to show off her talent in the grand capital of Saint Petersburg. But can she kill another enchanter—even when his magic calls to her like nothing else ever has?
For Nikolai, an orphan, the Crown’s Game is the chance of a lifetime. But his deadly opponent is a force to be reckoned with—beautiful, whip smart, imaginative—and he can’t stop thinking about her.
And when Pasha, Nikolai’s best friend and heir to the throne, also starts to fall for the mysterious enchantress, Nikolai must defeat the girl they both love… or be killed himself.
As long-buried secrets emerge, threatening the future of the empire, it becomes dangerously clear… the Crown’s Game is not one to lose.

“Then let the Crown’s Game begin.”

Despite the 3.5 star rating, I actually really loved this book. So why did I only give it 3.5 stars? There were just a few issues I had with the book that I’ll get into in a minute, but first, why not start off with what I loved?

Rarely is there more than one enchanter in Russia at a time, and when there’s two, they must compete in the Crown’s Game. I will admit that when I read the synopsis I immediately though of Throne of Glass, but it was nothing like it. So, Vika, one of our main characters, has grown up thinking she’s the only enchanter while Nikolai, the other one, has always known there was but didn’t know who. When the tsar realizes he needs an enchanter to help advise him, the Crown’s Game begins and Nikolai and Vika must fight to win the competition because the loser will die. Yet, the two end up falling in love. Not only does Nikolai realize he loves Vika, but so does Pasha, the crown prince and Nikolai’s best friend.

The Crown’s Game is a historical fantasy book set in Imperial Russia. The setting was one of my favorite parts. Everything was so vividly described that I had a perfect image in my mind the whole time. Evelyn Skye did such a good job with describing Saint Petersburg, it was as if you were really there! This is probably one of the best researched historical-fiction books I’ve read in awhile. You can just tell how much research went into it, and the fact that Skye studied Russia in college definitely shows. Honestly, the world-building (is that the right word when it’s historical fiction? I don’t know) has to be my one of my favorite parts of the story.

Vika was my favorite of the three main characters. I loved her as a character. She focuses more on magic involving the elements, like for example, instead of tailoring a dress, she actually made one of snow. How cool is that? Her whole life she’s been training under Sergei, a man she has grown up believing is her father. Both of them thought that when Vika turned eighteen, she would become the Imperial Enchanter. So, she has been training hard for when the day comes that she turns eighteen.

Nikolai restrained himself from reassuring her not to be afraid. He needed to know what the leaf meant.

“The jagged one represents… death. You were born of death, and…”

I liked Nikolai, but I liked Vika and Pasha more. His mother died when he was born and he never knew his father. When he was young (seven or eight I believe), the Countess Galina (who I hate) took him in to train him to be the Imperial Enchanter and for the Crown’s Game. Not long after he arrived in Saint Petersburg, he also met and befriended Pasha, the prince. I don’t know why I didn’t like him as much as the other two, I just didn’t. He came across as very jealous and annoying at times.

Pasha, the crown prince, which is short for Pavel, is another one of the main characters. He hates the pompous life that comes with being the prince, and wishes that he could just lead a normal life. So, he often sneaks out of the palace to go hang out with Nikolai. He also has no clue that Nikolai is an enchanter, or what the Crown’s Game is and that it has started. I actually really liked Pasha’s character, though the whole prince-who-wishes-he-was-normal-and-sneaks-out-of-the-palace thing is kind of overused at this point and cliche, but whatever.  The ending tore me to pieces though with him.

This story is told from a ton of POVs, which is one of the reasons I had a hard time with it. My favorite character overall has to be with Ludmila, who we also get a few chapters from. She owns a bakery on the island Vika has grown up on, Ovchinin, and has become very close with Vika in the process. So when the game starts and Sergei is taken away to SIberia, Ludmila joins Vika in Saint Petersburg. We also get chapters from Princess Yuliana, Galina, Renata (a maid at Galina’s home and friend of Nikolai’s), Sergei, the tsar, and a few others. I’ve mentioned before how much too many random POVs annoys me, and though they were all still centered around our three main characters, there were a bit too many for my liking in this book.

He smiled sadly. “I was lost from the moment I saw you on Ovchinin Island. It took a long while for me to realize it, but it’s true. I’ve spent my entire life scrambling to fit in and to change myself, Vika, but where I’ve belonged, and who I needed to be, has been right here the whole time. I love you.”

The magic was enchanting. I loved all the descriptions of how it works, like how Vika was able to feel the thread and just throw Nikolai’s enchantments off of her. I thought that was so cool. I do wish there was more magic considering this book is centered around it though. Seriously, I just found it soooo cool and fascinating how the magic in this world works.

The writing wasn’t my favorite, but I really enjoyed it. The world-building was amazing, but just the writing in general wasn’t spectacular, it was still good though. But because it was told from so many POVs it was harder to kind of immerse yourself into the story when it was always changing. I absolutely loved all the food and dessert descriptions though. It made me want to stuff my face with cake during the scenes set in Ludmila’s bakery.

Like I mentioned, the synopsis kind of made me think of a few other books with competitions to become the king’s enchanter or something or other, like Throne of Glass for example. The plot wasn’t anything all that original or special, but the world-building and magic totally made up for it for it.

I definitely recommend this book, there were just a few things I had a hard time. I didn’t find it to be all that confusing, though I would have liked more detail in the beginning of how the competition worked. It was a great book though and I thoroughly enjoyed reading it.

9 responses to “The Crown’s Game”