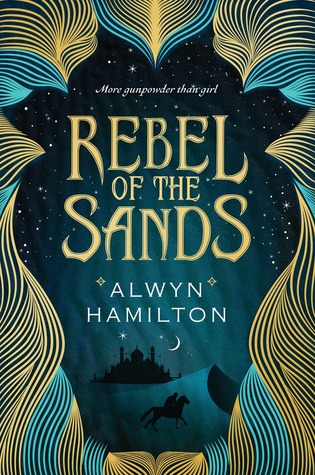 Summary from Goodreads: Mortals rule the desert nation of Miraji, but mythical beasts still roam the wild and remote areas, and rumor has it that somewhere, djinn still perform their magic.  For humans, it’s an unforgiving place, especially if you’re poor, orphaned, or female.

Amani Al’Hiza is all three.  She’s a gifted gunslinger with perfect aim, but she can’t shoot her way out of Dustwalk, the back-country town where she’s destined to wind up wed or dead.
Then she meets Jin, a rakish foreigner, in a shooting contest, and sees him as the perfect escape route. But though she’s spent years dreaming of leaving Dustwalk, she never imagined she’d gallop away on mythical horse—or that it would take a foreign fugitive to show her the heart of the desert she thought she knew.
Rebel of the Sands reveals what happens when a dream deferred explodes—in the fires of rebellion, of romantic passion, and the all-consuming inferno of a girl finally, at long last, embracing her power.

Rebel of the Sands was a good, enjoyable book, though I didn’t love it, nor did it really stand out in my mind to me. It was just kind of average for me. There were times that I couldn’t stop reading, and others where I was just kind of bored and slowly flipping through the pages.

“Haven’t you ever wanted something so bad that it becomes more than a want? I need to get out of this town. I need it like I need to breathe.”

To escape her small desert town, Dustwalk, Amani, our main character, disguises herself as a boy and joins a shooting competition to win money. When she was young, she would hear stories about Izman from her mother, and had wanted to escape their ever since her parents had died and she was left to live with her aunt, uncle, and his wives and children. During the competition, she meets Jin, a mysterious foreigner. The two of them escape Dustwalk, and embark on a long journey together.

Amani was an awesome main character. She was strong and fierce, and basically the definition of a strong female character for the most park. Amani is not afraid to stand up to herself, no matter who she’s talking to. Being a girl, she is treated as if she is basically a piece of stand and is only on the earth to marry. However, Amani defies all this and refuses to get married. She was a really fun character to read from. There are so many other female protagonists in YA though that are similar to this, and despite loving Amani’s character, she wasn’t anything all that special.

I’m not really sure how I feel about Jin. I did not necessarily dislike him, but at the same time, I did not like him. More of the latter than the former there, for sure. He was just kind of there. Like I mentioned, Jin really did not stand out in my mind to me.

There were a few side characters here and there in the first 2/3 , but once you reach that point, a bunch of side characters are introduced. I was so confused because it was all at once. We never really got to see anybody’s personality really shine because there were so many of them! I really hope these characters are better developed in the sequels.

“You know, I never believed in fate until I met you… then I started thinking coincidence didn’t have near so cruel a sense of humor.”

Can I say insta-love? Okay, it wasn’t super bad in this book, not like in some other books, but it was still there. Amani sees Jin, instantly finds him attractive and after a few days, she’s basically in love with him. It was confusing because one chapter starts off saying how they’ve been traveling for six weeks, so basically it skipped six weeks. Over that time, I guess the two of them realized they had feelings for each other, but it took awhile for them to actually kiss or anything. I think it was the six week skip that made it feel like insta-love for me, but I’m still standing by my opinion.

Rebel of the Sands is set in a Western/Middle Eastern fantasy world, which was sooo cool. I found this to be a very interesting setting and world. There wasn’t enough world-building though, causing it to feel like a generic Western fantasy world. I still found it to be a fascinating setting, I just would have liked it to be more fleshed out.

She moved like a storm someone had given steel to.

The writing was average. At points, it was predictable, but not always. There were some things that I saw coming, and others that were actually kind of surprising. It’s told from Amani’s point of view. Is there really anything else to say other than the writing was generic, at some points predictable, and kind of boring. The plot was basic, kind of boring like I mentioned, but it was still fun and enjoyable.

Overall, Rebel of the Sands was a good, enjoyable book, yet very generic and at some points, predictable and boring. I’m looking forward to reading the sequel next year, and I hope things like the world building and side characters are more developed and fleshed out.