Summary from Goodreads: When you can’t beat the odds, change the game.
Kaz Brekker and his crew have just pulled off a heist so daring even they didn’t think they’d survive. But instead of divvying up a fat reward, they’re right back to fighting for their lives. Double-crossed and badly weakened, the crew is low on resources, allies, and hope. As powerful forces from around the world descend on Ketterdam to root out the secrets of the dangerous drug known as jurda parem, old rivals and new enemies emerge to challenge Kaz’s cunning and test the team’s fragile loyalties. A war will be waged on the city’s dark and twisting streets―a battle for revenge and redemption that will decide the fate of the Grisha world. 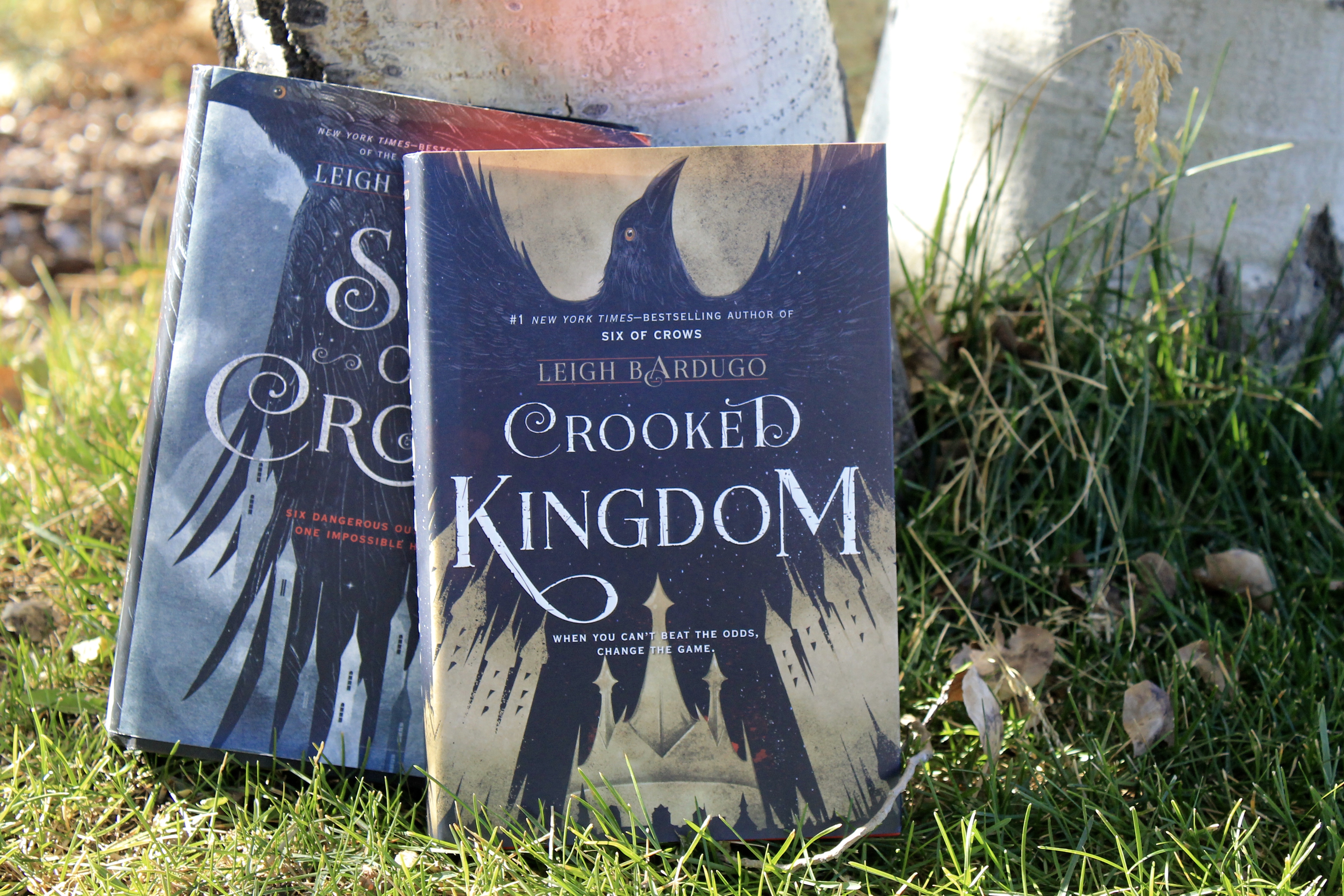 No mourners, no funerals. Another way of saying good luck. But it was something more. A dark wink to the fact that there would be no expensive burials for people like them, no marble markers to remember their names, no wreaths of myrtle and rose.

To say the least, this book was amazing in every was possible. Leigh Bardugo is able to make me laugh, cry, smile uncontrollably, and cry some more all in the course of only a few pages. How does she do it? I have no clue. My obsession with her books has just gone up times 100000 because of Crooked Kingdom.

Also, I’ve been saying for months that this book was going to destroy me emotionally, and I was so right. I think that just goes to prove my amazing psychic abilities.

How do I even begin describe this book?

I can’t really say the plot summary of this without spoiling it too much, so bear with me here. A week after the events of Six of Crows, we start off with our amazing crew (minus a member) trying to figure out how to get the amazing Wraith, who is being held in captive by the not so amazing Jan Van Eck, back. It’s full of twists and turns and yet another daring, impossible heist mission with a bit of romance sprinkled in here and there. We’re also reunited with our lovable cast of criminals and thieves that you can’t help but love with every ounce of your heart.

Inej is still my favorite. I love her so so so much. She’s broken on the inside, but incredibly strong and powerful. As said in the musical Hamilton, she’s definitely does not throw away her shot. Inej is so small she can blend into the shadows and sneak around Ketterdam, following people for blocks without getting noticed, earning her the nickname “the Wraith”.

“My mother is Ketterdam. She birthed me in the harbor. And my father is profit. I honor him daily.”

Kaz is even more amazing in this book than in the first (who could’ve thought that possible???). He continues to surprise everyone with the tricks and schemes up his sleeves. He’s even darker in this book too, with all his threats and bluffs that leave you thinking “this guy is actually insane” until you realize that he was making it up and then you just want to reach across the page and give him a huge hug, because how could you not? I love Kaz so much, and his background still breaks my heart into a million tiny little pieces.

I love Nina in this book so much! She’s so strong and powerful (literally…), and she goes through so much in this book. Her background isn’t as bad as some of the other character’s (trust me, it’s still bad), but wow, does she go through some really bad and heartbreaking stuff in this book. All the while though, she continues to surprise people with the strength after all she’s endured. Nina may not seem deadly, but wow, she is. I love her so much.

...but for the first time since he’d looked into Nina’s eyes and seen his own humanity reflected back at him, the war inside him quieted.

We’ll find a way to change their minds, she’d said, All of them, He would locate Nina. They would survive this night. They would free themselves of this damp, misbegotten city, and then… Well, then they’d change the world.

And Matthias! I’ve always loved him, but he’s never been my favorite like Nina, Kaz, and Inej. Matthias is so amazing in this book though. I love him so much more than I ever thought I would. He’s not as vicious and deadly as some of the other characters (take the other three above for example), but he still has his super deadly vicious moments. Plus, his romance with Nina is just the most adorable thing in the history of adorable things. Can you tell that I ship them uncontrollably?

Jesper is nothing short of hilarious. Even in the worst of situations he’s always there to make some kind of joke or sarcastic remark all the while being super deadly and amazing. If you met him on the street, you probably wouldn’t believe that he is actually a member of a vicious gang and has killed before. I still can’t believe it. He’s super awkward too, which makes him even more adorable. I liked him a lot more in this book to be honest.

“You’re stupid about a lot of things, Wylan, but you are not stupid. And if I ever hear you call yourself a moron again, I’m going to tell Matthias you tried to kiss Nina. With tongue.”

Wylan wiped his nose on his sleeve. “He’ll never believe it.”

“Then I’ll tell Nina you tried to kiss Matthias. With tongue.”

And the award for best character growth goes to Wylan Van Eck. Seriously. Wylan is amazing in this book. Please don’t kill me, but he was my least favorite in Six of Crows. I know, I know! I didn’t get how everyone loved him so much, but now I totally do. Wylan has been through a lot and we learn all of it in this book from his POV. His father treated him terribly growing up, but Wylan still continues to be super kind and caring, but he also becomes much stronger and deadlier here. IT’S WONDERFUL!

The writing was A++++++++. Leigh Bardugo can make me feel a thousand emotions all at once with her witty dialogue and beautiful writing. AND THE PLOT TWISTS??? All those just come out of nowhere. I’m sitting there, reading my book, and all of a sudden I’m like “WHOA, what just happened? THAT WAS AMAZING!!!”. Seriously though, Leigh Bardugo has such beautiful writing, which is hard to come across in a fantasy book as action packed as this. Her use of metaphors and detail are wonderful.

“Crows remember human faces. They remember the people who feed them, who are kind to them. And the people who wrong them too. They don’t forget. They tell each other who to look after and who to watch out for.”

We continue to learn even more about this amazing world! Like if you thought you learned enough in the first four Grisha books, you were wrong. We learn a lot about Ketterdam/Kerch here and we see how much the countries have developed since the war. Leigh Bardugo paints a perfect picture in your head of this world with her great world building and gorgeous writing.

Let’s see, what else?

Well, the heist in this book was wonderful as well. So unlike the one in Six of Crows, but still amazing, with lots of little ones mixed in. And there are so many twists and turns you don’t even know. The whole plot was just so wonderful, and still very different than any other YA book I’ve ever read. I mean, where are all of our YA heist books full of deadly but lovable characters like these books?!

“Have any of you wondered what I did with all the cash Pekka Rollins gave us?”

“Political bribes?” offered Nina. They all looked at Matthias. “This is where you tell us how awful we are,” she whispered.

Overall, I loved this book so much. It was beautiful. It made me cry and laugh and smile and want to scream all at once. If I could, I would rate it 100000000/5 stars because I loved it just that much.