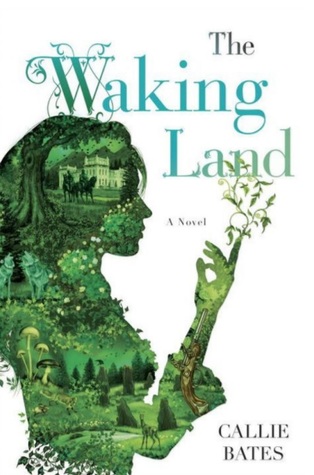 The Waking Land by Callie Bates

Summary from Goodreads: Lady Elanna Valtai is fiercely devoted to the King who raised her like a daughter. But when he dies under mysterious circumstances, Elanna is accused of his murder and must flee for her life.

Returning to the homeland of magical legends she has forsaken, Elanna is forced to reckon with her despised, estranged father, branded a traitor long ago. Feeling a strange, deep connection to the natural world, she also must face the truth about the forces she has always denied or disdained as superstition powers that suddenly stir within her.

But an all-too-human threat is drawing near, determined to exact vengeance. Now Elanna has no choice but to lead a rebellion against the kingdom to which she once gave her allegiance. Trapped between divided loyalties, she must summon the courage to confront a destiny that could tear her apart.

Yet another disappointment. After reading the synopsis, I was so so so excited for this book, but sadly, it just didn’t deliver at all. I ended up DNF’ing it with about 100 pages left. The main character annoyed me so much and there was just no plot at all. It was confusing and boring.

The main character, Elanna, like I said, was so incredibly annoying and obnoxious. Also, she’s a terrible friend. Minor spoiler alert, but she leaves behind her best friend to be either imprisoned or killed because it’s an inconvenience?? Yeah no. If you do that, I wouldn’t call yourself her best friend anymore. She was so clueless and dumb and acted like she was trying to be like just about every other YA heroine, but was failing.

Also, the romance totally came out of nowhere. I kind of figured she would fall in love with this one guy, but I feel like one minute they were friends, and the next she had fallen in love with him. It was very insta-lovey to me. I’m also really confused about the whole marrying the ground part?? I was so confused I couldn’t tell if she had actually done it or not, but she kept talking about it and how she wanted to. Like what does that even mean?

The worldbuilding was subpar. It could have been worse though. The place names were all so similar and I was constantly confused about where/what certain places were. I could have sworn Ida was a kingdom, but then later on it seemed like it was a city or part of a country or something? I was confused. But really, there was so much potential for world building, but it just did not deliver. It was confusing and not well fleshed out, though you could see the author was trying.

I don’t have much to say about the writing other than that it was boring and simple. It wasn’t very beautiful or poetic or anything, just basic. Not in a bad way, there was just nothing about it that stood out at all.

Also, like I said, there was basically no plot at all, and when there was, it was super boring. Basically nothing happened at all and finally at around page 250 in the eARC, I was so bored of it, I just stopped reading. Elanna flees for her life when she is accused of murdering the king who raised her and then finds her way back to her family, who is plotting a revolution. Oh and another thing that annoyed me, her father basically said to her that he was only glad she was back because she would be useful in the revolution. Not because he cared about her or anything. Just the whole relationship with her parents was so terrible and forced.

Overall, I clearly did not enjoy this book. It was boring, confusing, and all around, forced. All the relationships and everything felt so forced and not real. The characters were all boring and cliché as well. I personally, would not recommend this book, but I could see some liking it. So, if it does seem interesting to you, then check it out.

2 responses to “The Waking Land by Callie Bates”